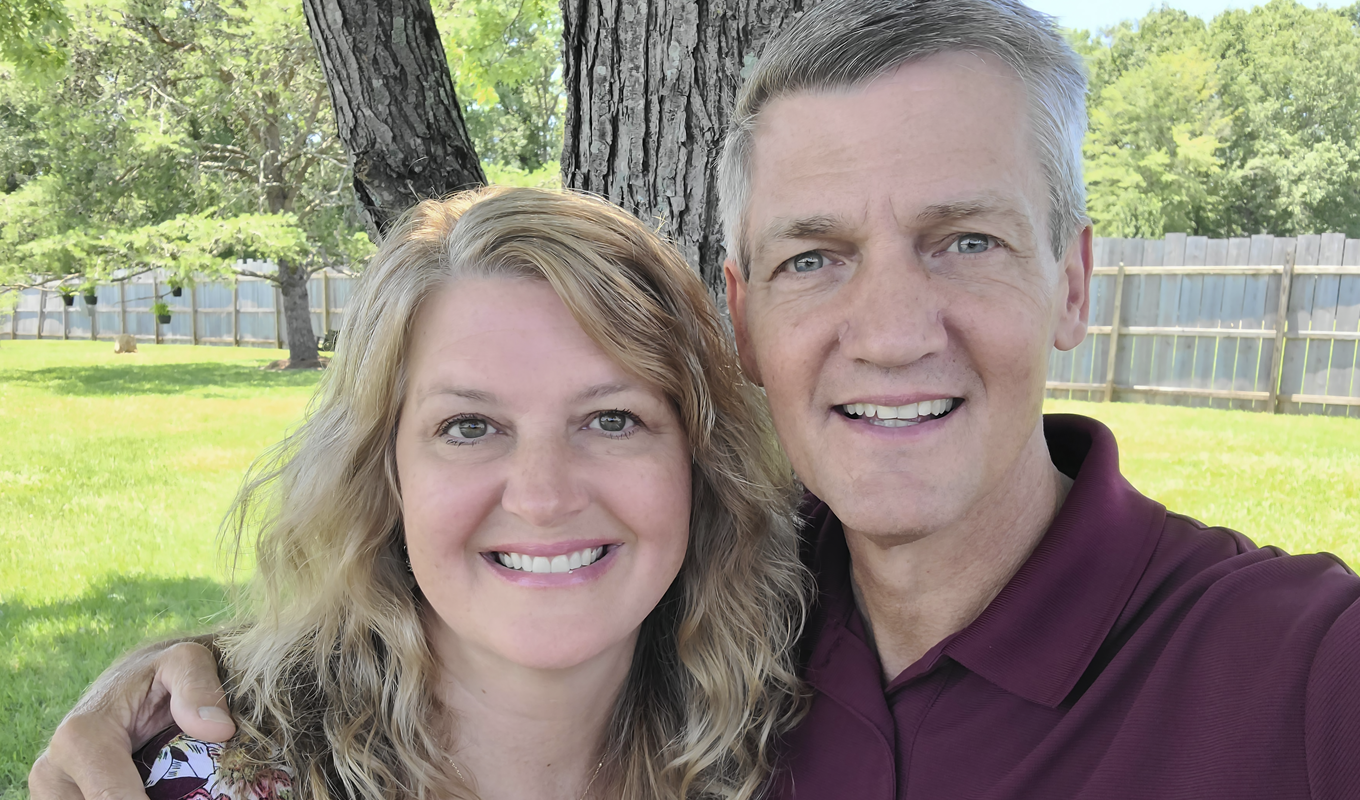 Doug Stroup uses his role as senior director of the media ministry Make It Clear Studio to help reach people with Biblical truth and tackle tough topics for audiences of all ages.

“I also write or co-write many of our screenplays,” Doug says. “During filming, I normally am director.”

The Orlando, Florida-based ministry’s latest project is a movie on human trafficking, and it is working on a film about abortion.

From trauma to mission: For years, Doug wanted to use his gifts and experience in film to bring the Gospel message to others. After a traumatic brain injury from a cycling accident, that goal looked like it might never be reached. But three years later, by God’s grace, Doug had fully recovered. And just a year after that, in 2019, Doug’s vision was about to be realized.

Dr. Stan Ponz, the president of Make It Clear Ministries, an evangelism organization, had an idea for reaching people through film. Make It Clear’s mission is to take the Word of God “with clarity into every person’s world.” He wanted to start doing that through media and contacted Doug, who had been involved in the film industry for several years, to help him with a new project.

“Stan just really began feeling the prompting of the Lord to start a film ministry arm,” Doug says. “He asked me to pray about becoming the senior director of Make It Clear Studio. After prayer and discussion with my wife, Amy, we accepted.”

Working in film to show others the beautiful message of the Gospel “has been wonderful,” Doug says. “We thoroughly enjoy what we do here.”

Catching the bug: Doug’s desire started long before his accident. He started acting when he was just 10 years old.

“I did high school theater and plays in church and really just caught the bug as a child,” he says. “And so, I continued to do that in community theater, then in amateur theater.”

Soon after, Doug moved into professional theater and has been on several movie and television sets since then. His roles have included everything from being a stand-in and photo double to holding support and lead acting roles in such productions as Christmas Manger, His Divine Appointments, and The Dream Motel. All these experiences together prepared him for what he does now.

Doug had always wanted to mesh filmmaking and ministry.

“Every time I was on a set somewhere, I saw it as a ministry,” he recalls.

But it was not always easy to be a follower of Jesus on the movie set.

“Honestly, I got laughed at multiple times, and people turned their back on me because they wanted to talk about other things—worldly things—that I didn’t care to talk about,” Doug says.

But none of that deterred his resolve.

“I really saw that as a ministry field,” he says.

Doug recalls God telling him through these experiences “to put Me back in film.” And, as it turned out, those experiences were the rich soil from which Make It Clear Studio’s success has come.

Make It Clear Studio is “totally dedicated to producing high-quality, Christian-based films with a message that is consistent with the Word of God,” Doug says. “Through that, we seek to produce professional films that have powerful messages that will reach the world for Christ.”

The films are entertaining, but that’s not their main purpose.

“We are not against entertainment at all,” Doug emphasizes, “but we do seek to educate the viewers.”

So, Make It Clear Studio is going down the edutainment path.

“We desire to make the viewers think about the topic they just saw in one of our films and to consider where they stand on that particular topic,” Doug says.

In that way, their films are educational while also being entertaining.

Making connections: Producing quality films with a meaningful message requires connecting with people’s experiences. That’s why Make It Clear Studio takes real-life scenarios and shows how they relate to the Bible. To do that successfully, you need to know your audience.

Every time I was on a set somewhere, I saw it as a ministry.

The short film series The Bible Says is directed toward middle- and high school students. Making connections is especially important for that age group.

“We have raised, and are continuing to raise, an entire generation of young people without the foundation of the Word of God,” says Doug. “So, they don’t have the moral foundation because they don’t know what God’s Word says about them and about their lives and about the issues they’re dealing with on a daily basis.”

Often, middle and high schoolers “are the ones with the most questions,” Doug points out. “They’re the ones who are facing the very tough issues on a daily basis. They’re the ones that don’t know who to turn to in order to talk about these things.”

The medium of film is important because many teenagers are not hearing these things from anyone in their lives throughout the week.

“Maybe they’re not in church or they’re not close to their parents. There can be so many factors involved,” Doug says.

The Bible Says series deals with issues like bullying, lying, cheating, the dangers of vaping, and human trafficking with more films to come.

“Some of our upcoming topics in The Bible Says series are drug addiction, mass shootings, teen suicide, teen pregnancy, pornography, gender identity, peer pressure, and hearing from God in a world of distractions,” Doug says.

“Most young people today are in a very difficult environment,” Doug says.

The film Bullying in particular is based on a true story and has a powerful message.

“I was remembering back to what actually happened in the life of this young girl who was in our youth group,” Doug says.

The story has a tragic ending.

“She was pushed to that point of believing the lies that the bullies were telling her about herself,” he says.

We have raised, and are continuing to raise, an entire generation of young people without the foundation of the Word of God.

Doug wants the viewer “to feel the impact that their words—their bullying—have on the victim.”

Streaming: Make It Clear Studio does not just produce films and movies. It also has a show that can be streamed on YouTube and Vimeo for young adults called Issues and Answers for Today, hosted by Doug and Dr. Stan Ponz, to guide them in the Christian faith as they go out into the world as students or beginning careers and starting families.

Naturally inquisitive, especially in a world that is changing as quickly as ours, “the questions that they have can become hurdles in their lives, and those hurdles become brick walls,” says Doug. “That’s serious because those brick walls will hinder their forward progress in life, so we’re trying to give them a foundation based upon the truth of God’s Word.”

The point behind every film and video is to reach young people with the Word of God.

“We want them to know that God’s Word speaks on the issues that they’re dealing with,” Doug says. “They’re not alone, and they need a personal relationship with Christ to give them this foundation, based on God’s Word, to really make the right decisions through life.”

“One of the main challenges is the Christian film industry not being taken seriously,” he says. “A lot of people automatically consider a Christian film cheesy and won’t even give it an opportunity to prove otherwise.”

The task here is simply getting a foot in the door, but Doug remains optimistic, confident that the work Make It Clear Studio is doing is paying off.

“We seek to produce content that is appealing to the viewers and to do it in a professional manner that gains the respect of the viewers and makes a difference in the way they think,” he says.

Every film is an opportunity to win that respect and to be the catalyst for real change in people’s lives.

To do that, there are other practical challenges that exist, like funding.

“We pray for the ‘God connections’ to those who will believe in us and support us financially,” Doug says, “until we can get to the point where we can produce future films based on the success of our previous films.”

This takes commitment to a vision.

“One of the major challenges is to get people to see and to recognize the heart behind the ministry—who you are and what you’re doing and why you’re doing it,” he says.

Having the money to produce quality films and having the trust and respect of people can be a formidable challenge, but Make It Clear Studio’s future is bright if its positive feedback can be trusted. Viewers have remarked on the “professional and high quality” nature of their films and how they each “hit the intended target” and are “relevant for today.”

Recent and upcoming projects: The ministry’s most recent film, Trafficked, shows the evils of human trafficking from the perspective of a teenage girl. The film has already won over 25 awards around the world at Christian and non-Christian film festivals alike.

“We want to raise awareness,” Doug says. “This is going on right under our noses.”

“If we all pay more attention to what is going on around us, we may be able to help rescue someone from trafficking and to keep someone from ever being trafficked in the first place,” Doug says.

Their next film, My Name is Melissa, is about abortion. Before coming to Make It Clear Studio, Doug had already done two films on abortion, and he is especially eager about this one’s release.

“We’re doing our part to fight this battle,” Doug says. “We want to portray through this film that every life deserves to be lived.”

Through the power of film, hearts can be changed and the lives of children saved, he says.

Filming for My Name is Melissa began in July and is continuing this month.

How to help: All their films can be found at the Make It Clear Marketplace.

“Anyone can help us produce more films with powerful messages by supporting us financially,” Doug says. “They can download our Make It Clear Ministries app and/or go to makeitclearstudio.com and click on the Support link.”

Prayer request: “That we overcome the spiritual battle that Make It Clear Studio faces daily due to the topics and content of our work. We are literally fighting the enemy daily, and we covet your prayers for us as we stay strong in the fight.”

Greg Feulner is assistant editor of the Samaritan newsletter.