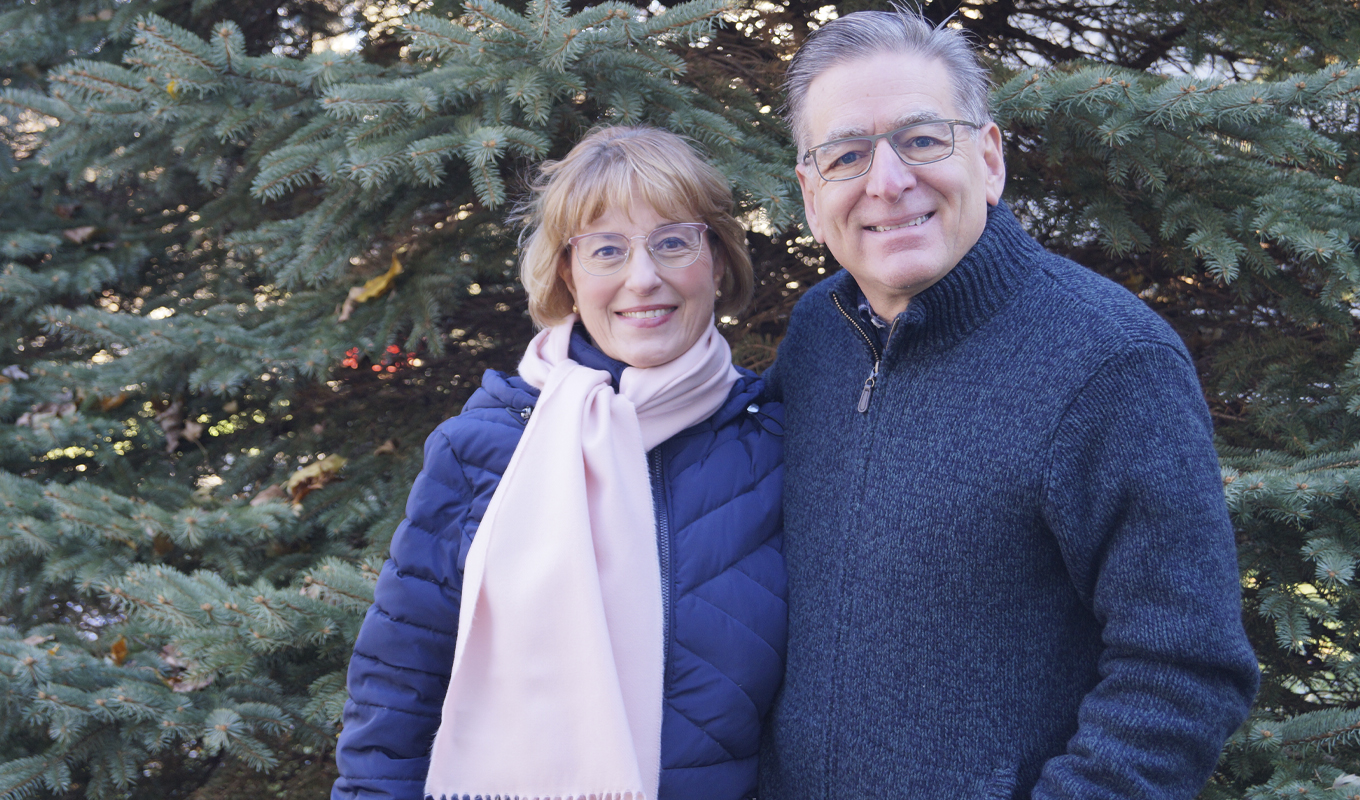 Healing of the Heart Ministries (HHM), led by Chuck and Diane “Dee Dee” Breznau, is a Biblically based ministry of reconciliation healing hearts and families. Based in Lapeer, Michigan, HHM works with married couples, couples getting ready for marriage, and singles. Through one-on-one mentoring, seminars, and Christian radio, Chuck and Dee Dee mentor people to see their calling in Christ and find healing from brokenness.

Answering the call: In 2001, Chuck and Dee Dee’s pastor asked their church’s deacon and elder candidates and their wives to take a week off work to address issues in their marriages. Chuck and Dee Dee were one of those couples, and that was the seed of HHM.

Through that week, the Breznaus, who had been married 21 years, became aware of “problem areas we didn’t even know were blocking our relationship.”

“Even after much prayer and going to every conference through the years, we still hadn’t addressed those heart issues that kept us from connecting emotionally and spiritually as God would have desired,” Chuck says. “We began to face some of the issues and work toward resolution of them.

“It was amazing, really. Our children said near the end of the week. ‘You need to keep going. This is good.’”

Budding ministry: As the Breznaus continued to experience life-changing benefits from what they had learned, the desire to bring healing to others in the form of a full-time ministry grew as well. They were able to go through more training in 2004 and moved forward.

Dee Dee especially benefited, receiving healing for trauma she had experienced before marriage.

“I was set free of anger,” she says. “I didn’t start out as an angry person, but I think through the trials of life and in our marriage, I became that. And I was praying so hard about that. God set me free and gave my husband a heart to come out of himself and come alongside me.”

Others started seeing the difference in the Breznaus’ lives, “and they started coming to us for help, and it has never stopped since,” Dee Dee says.

After Chuck lost his job in 2007 due to restructuring at the company he worked for, the Breznaus prayed and followed God’s leading into full-time ministry.

“We began to see God fulfill everything in our hearts and bring  the ministry to fruition,” Dee Dee says.

Chuck says it was “kind of scary, starting a ministry.”

But, stepping out in faith, Chuck and Dee Dee began going wherever God called them.

“We started off in really, really small places,” Dee Dee says. “We have beautiful offices here now, and we’ve seen God provide for us along the way.”

They launched HHM full-time in 2007, and, since then, Chuck and Dee Dee have worked with hundreds of people ranging from 18-year-old singles to married couples in their 80s from all over.

“We’re just about to put out our 15th-anniversary newsletter.” Dee Dee says. “We’re a ministry of reconciling people to God and to one another. We’ve seen God do unbelievable healing in people’s hearts, lives, and marriages.”

Support: HHM does not charge a fee for services, wanting no impediments for anyone who needs help.

“HHM holds the conviction that this life-changing, intensive mentoring be offered by faith purely on a donation basis,” Dee Dee says.

"We began to see God fulfill everything in our hearts and bring the ministry to fruition."

How it works: People come to HHM for an entire week. Chuck and Dee Dee work with them one-on-one for three hours each day. The Breznaus give clients tasks between meetings. HHM also provides customized tools and materials to work with that clients can take home after the week. They also help with follow-up as needed.

“Our materials are custom-made for whomever we’re mentoring because we know that, while many of the issues are the same, people respond differently because everyone is different,” Dee Dee says. “You can’t really put people in a box.

“Jesus Christ gets all the glory. We’re witnesses of His power. Our clients discover the roots of their problems, and then the Holy Spirit works to draw them in to resolve these problems.”

True reconciliation: “For lasting change in a person’s life or marriage, a close heart relationship with Christ is vital,” Chuck says. “That’s the key thing, really. We help by leading them in that direction. Jesus truly does heal the brokenhearted and sets the captives free.”

Dee Dee adds that “many have been Christians all their lives, but have never addressed the deeper heart issues both spiritually and emotionally affecting their responses and reactions today.”

“We can get stuck in our issues,” she says. “But when we get free, we can become all that God created us to be and do.”

Changing lives: One man they have helped was abused by his father “even while he was in the womb,” Dee Dee says. He had “terrible physical trauma” as a result. The man even fled his country to escape the situation, and, by God’s grace, “he was able to forgive and let go of those things that had angered him so much in the past.”

One young lady grew up in a family deep in the occult, and, because of different traumatic experiences, she was afraid to go to school. Her home life was very difficult and her father took his own life, compounding the heartache.

“God set her free in our office.” Dee Dee says. “She was able to go to school, and she’s on fire for God now. She started a prayer group at her school, a public school, and it’s just so amazing to see her grow now in her faith and how God’s turning that awful, awful pain and situation around for good.”

Another woman they helped “had every form of dysfunction imaginable,” Dee Dee says.

“She had gone away to a Christian college and gotten involved in a cult. The cult leaders had really had her in servitude. She was caretaker of—basically the mother to—their six children, and they worked her almost to death. They were absent for their children, and she was stuck there. She felt very trapped, but at the same time, she felt a responsibility to these children because in one sense she was their only mother. Eventually, she got out of there, but she was so distraught that she tried to commit suicide. And that’s when I saw her. As a result of her week here, God set her free.”

The young lady is an artist.

“She drew what God was showing her during that week of counseling,” Dee Dee says. “And we have those drawings, and they help many, many people.”

One drawing shows the young lady’s heart in a box trying to get out. She was struggling so hard to break free, the Breznaus say.

“Towards the end of the week with us, the Lord gave her a picture of her heart escaping that box, healing. And Jesus told her that that box was going to become a gift that she would give others. So it was like a gift box at the end of the week,” Dee Dee says. “She went on to study art, and now she’s a premier marine artist.”

Family bonds: Childhood trauma, indwelling sin, and habits developed over time all hinder marriage intimacy. Mentoring not only helps a person to disentangle the mess but also allows a husband or wife to see what their spouse is going through.

“We really encourage both people to come because they can see each other’s pain,” Dee Dee says. “They learn about that other person and what they’ve experienced throughout their life,” Dee Dee says.

A lack of understanding in a marriage can affect the whole family.

“Many parents realize they’ve hurt their child, and they need to ask for forgiveness,” Dee Dee says. “And when they do that, the child becomes more open to them, and then the child can share their own pain and receive healing.”

Through helping parents, “we want to produce security and peace in the hearts of children. We have seen this happen and we’ve had children say, ‘Wow, this is so great.’”

Chuck and Dee Dee received a report from one young man in his 20s thanking them for the difference they made in his parents’ marriage and, as a result, in his life as well. One mended relationship can bond the whole family.

Pastors refer people to HHM. Many of these former clients use the tools they’ve been given to help and encourage others.

“Tell others that there is hope,” Chuck says. “So often, people don’t have any hope. If you see a couple or an individual struggling, let them know you care.

“God can make a way when there seems to be no way. We are privileged to see that over and over again with our clients and in our own lives.“

“God answers prayer,” Dee Dee says. “He listens to the heartfelt prayers of His people.”

The Breznaus requested prayer for:

Greg Feulner is assistant editor of the Samaritan Ministries newsletter.