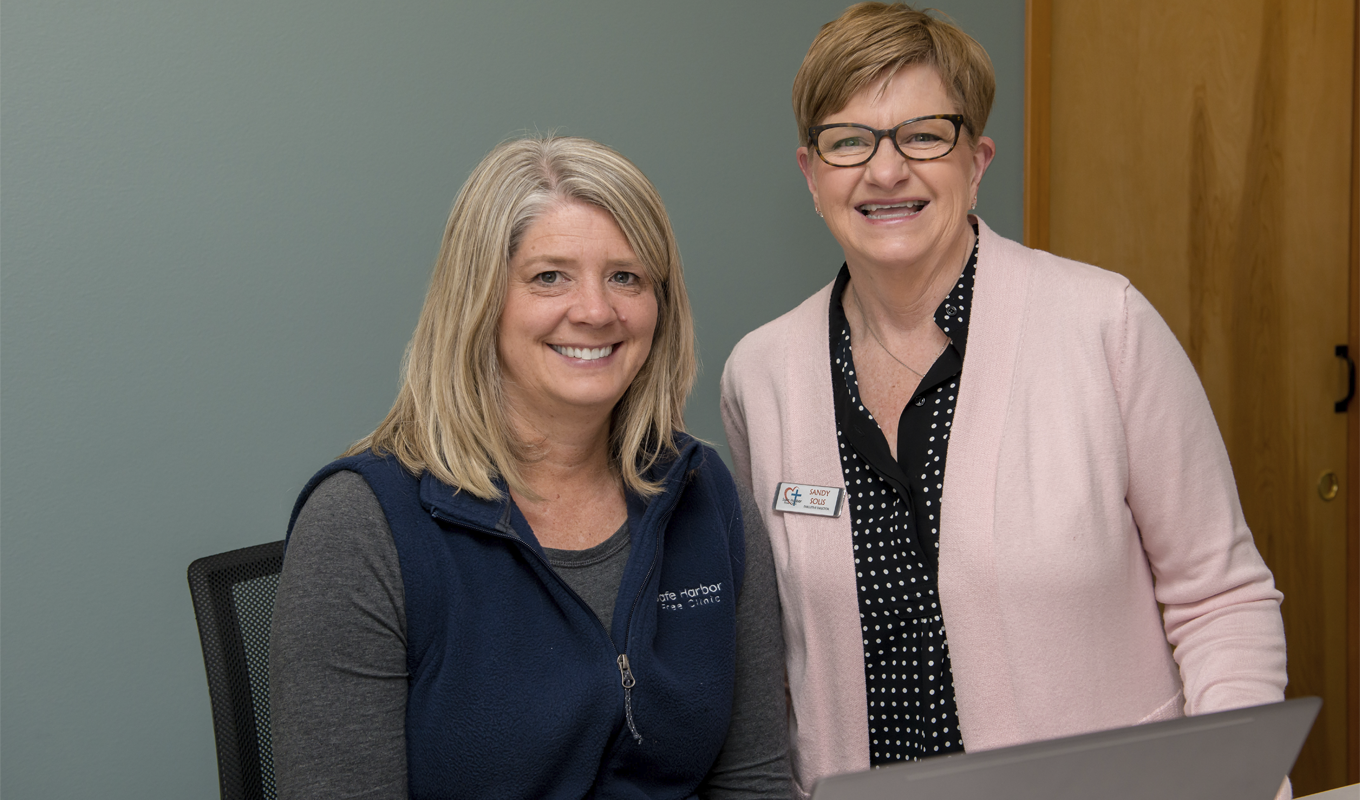 Read also Why SMI? It's a different way to do health care

Sandy Solis and Renee Hendrickson show Christ’s love to those in need through their service at Safe Harbor Free Clinic in Stanwood, Washington, north of Seattle.

Beginnings: The clinic started in 2009 from the desire of two medical providers, physician assistant Keith Erickson and Dr. Jimmy Grierson, to see care extended to those who can’t afford it. Erickson had wanted to start a similar ministry in Arizona but hadn’t been able to. Grierson began to think about the need for a free clinic in the area after going on a missions trip to Haiti and wondering why Christians weren’t offering health care to people in need in the U.S.

With the help of local missions pastor Mich Michl, the two men got Safe Harbor up and running at a critical time. The financial crisis of 2008 had resulted in many people losing their jobs and insurance. Safe Harbor started as a monthly clinic in space borrowed from one of the other clinics in Stanwood. They knew they were meeting a need when the line of people to be seen snaked around the building.

“I think they finished at midnight that night,” says Sandy, Safe Harbor executive director. “They went like that for a few months, but the need was so great they went to two nights a month and then four.”

Safe Harbor moved into its own space in 2014. It plans to expand twice-monthly services into nearby Arlington with the help of Smokey Point Community Church. Sandy says there’s a “fairly sizable homeless population” in that area.

How they help: Safe Harbor sees over 100 patients per month who are uninsured or underinsured.

“On our same-day clinic (Wednesdays and Fridays), we kind of see it all,” says Renee, Safe Harbor’s clinic manager. “It could be ear pain, chest pains, trouble breathing, a rash … kind of anything you would go to urgent care or doctor’s office for.”

It’s a “same-day” clinic because appointments can only be made by calling earlier that day to be seen that evening. The volunteer physicians aren’t available during the day.

Safe Harbor also offers specific-issue clinics less frequently throughout the month, such as chronic care, podiatry, respiratory, cardiology, and women’s health issues. There’s also a procedure clinic for such things as cyst removals or biopsies of minor skin lesions. A dental clinic has been started for those needing fillings or extractions, and limited mental health counseling is being offered.

“We started a woman’s clinic because we had a couple of patients who died from cancer—one from cervical cancer and one from breast cancer. Their conditions hadn’t been caught in time,” Sandy says. “We realized we needed to do something to help women’s unique health issues. There’s no reason they shouldn’t be able to get preventative exams just because they don’t have health insurance. So we started a women’s clinic for them to be able to get their well checks. We even started using ultrasounds. We don’t have a radiologist to read them, but we have a couple of physicians who can refer patients based on what they see.”

“We’re praying for God to expand our abilities down the road,” Sandy says.

About 15 providers volunteer at Safe Harbor, with about 120 other volunteers offering help by answering the phone, making appointments, drawing blood, or serving as nurses.

Since state medical cards are available for children whose families need them, Safe Harbor’s patients are mainly adults. The clinic primarily serves people who don’t qualify for Medicaid but also can’t afford health insurance and whose income is under 250 percent of the federal poverty level.

“We have a fair amount of migrant workers and Hispanic community members,” Sandy says. “We’ve also had patients lately who are from Asia.”

Sandy also emphasized that since Samaritan Ministries is not health insurance, its members are considered uninsured and are welcome to use the clinic’s services.

“It was overwhelming and humbling,” Sandy says.

Besides giving Safe Harbor a $10,000 grant, the award and resulting magazine article also brought volunteers from other parts of the state who hadn’t known about the clinic, donations from other states, and dinner one night for the volunteers from a local pastor and his wife.

“It was big exposure for us,” Sandy says.

Showing Christ’s love: Safe Harbor’s mission statement is “To show Christ’s love by providing free healthcare to those in need.”

One is living out their faith in front of non-Christian volunteers.

While those volunteers are not required to share the same beliefs as Safe Harbor’s staff, “they’re aware of them, and they have to sign a form saying that they recognize that Safe Harbor has these beliefs,” Renee says. “So, we have a lot of volunteers who are not believers, and we look at them as a mission field as well.”

Prayer is held as an evening’s clinic starts, for example, including all volunteers.

The more obvious outreach is to patients. The clinic has a volunteer available for them to meet with at the end of their visits about spiritual care and other resources they may need.

“Their information form contains space for prayer requests and has become a big tool for us to address their spiritual needs,” Renee says. “Our spiritual-care person will get that form while the medical providers are seeing them and then be able to use that as a starting point to reach out to them. As far as presenting the Gospel, we trust that God will open up the doors for those willing and wanting to hear the Gospel.”

The clinic’s counseling also is faith-based. Safe Harbor has some lay counselors offering support to patients, but “we’re prayerfully trying to figure out how to expand a counseling service,” Sandy says, such as bringing in interns from Christian colleges.

“The idea is that we want to have it come from a Biblical perspective,” she adds.

‘God is in it’: Sandy felt overwhelmed by the idea of the responsibilities of the position of Safe Harbor executive director despite being asked to apply three times before saying yes in 2018.

“It’s been a big learning curve, but I firmly believe that God called me to this for His purposes because it was certainly not something that I would have ever felt qualified for,” she says.

She believes her insecurity in the role is one of the reasons the Lord put her there: to teach her to trust in Him.

“That’s the main security that I need to have, that God is in it, and I need to follow where He leads us,” she says, adding, “The beautiful thing is our staff is a good team, so I never feel like I’m alone in it. The board backs me up, the team backs me up.”

“She’s a great leader, encourager, and supporter of us,” Renee says. “She has created a base for us all to communicate and work together really well as a team. We all bring different things, and it has worked, so it’s just a God thing.”

‘Nudging and trusting’: Unlike Sandy, Renee had a medical background with a licensed practical nurse certification.

But like Sandy, she hesitated at first when hearing the call to serve at Safe Harbor. It was the second time she had been encouraged to get involved, and she took the clinic manager’s job, bringing to it her earlier experience.

“It took a little nudging by God and trusting He was going to be with me and that this would be OK for my family,” Renee says of the part-time position. “I was initially hired to do one evening clinic a week and then kind of oversee the managerial piece, overseeing communications with staff and following up on referrals for patients.

“I love my job. It has been the biggest blessing to me on almost every level in my life. My faith has been stretched by learning to work with different people and trusting God to provide what we need daily.

“We see a wide variety of people from every walk of life, a lot of beliefs, and many lifestyles. I don’t have that exposure in my normal life, so this has allowed me to interact with people and hear their stories. I pray that God will use me however He wants to that evening and that my interactions with them would be a piece of Him drawing them to Himself.”

Michael Miller is editor of the Samaritan Ministries newsletter.