The information provided in this article is for educational purposes and is not meant as medical advice.

What would cause a professional who had a long, distinguished career to publish a book repudiating his life’s work? What would you do if you became convinced you had been wrong about a medical procedure performed on 50 million people each year? 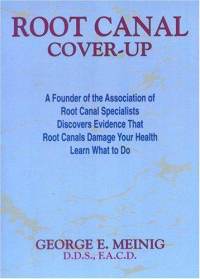 In 1993, the preeminent root canal specialist organization, the American Association of Endodontists, celebrated its 50th anniversary and honored George E. Meinig as one of its founding members. By that time Meinig had also been on the board of the Price-Pottenger Nutrition Foundation for 20 years.

The famous pioneering dentist, Weston A. Price, founded the research institute of the National Dental Institute, and in a career that spanned the first half of the 20th century, conducted thousands of experiments and traveled the world studying different cultures. Meinig thought he was familiar with Price and his impressive body of work.

Then a colleague sent Meinig something he had never seen before. A copy of two volumes of Price’s work on dental infections and degenerative diseases. Meinig says he was “terribly disturbed and shaken.”

“I became flabbergasted that our profession and the public had been cut off from learning about the basic and serious problems involved in this subject. … The pressure built up for me to accept responsibility for alerting the public to the great implications of Dr. Price’s research to current medical health issues.”

A rabbit exposed the problem

One day in the early 1900s, Dr. Price was treating a woman with severe arthritis who had been confined to a wheelchair for six years. At that time it was common practice to take bacterial cultures from patients who were ill, inoculate them into animals in an effort to reproduce the disease, and test the effectiveness of drugs on the disease. Even though her root canal looked normal on X-rays and showed no sign of infection, Dr. Price advised her to have it removed.

After extracting the tooth, he sewed it under the skin of a rabbit, which in 10 days developed the same crippling arthritis as the patient and died of the infection. The woman made a successful recovery, and Dr. Price determined to follow up on this fateful encounter.

Dr. Price was fortunate enough to have a team of 60 of the nation’s top doctors that worked with him in a research program he directed for 25 years. They published the results of thousands of tooth extraction and animal inoculation experiments, finding that in almost every case the animals developed the same disease as the patient, and most died of the infection in three to 12 days.

Contrary to the conventional wisdom that root-canaled teeth are sanitized and safe, this research indicated they were actually a good place for bacteria to take up residence, mutate into a nasty strain, and then hitch a ride through the blood stream into other parts of the body. Price and many of the doctors he worked with, including Dr. Charles Mayo, the founder of the Mayo Clinic, believed they had verified the “focal infection” theory of disease, an idea in medicine that dates back to ancient times.

The focal infection theory posits that a local infection affecting a small area of the body can lead to subsequent infections in other parts of the body due either to the spread of the infectious agent itself or toxins produced from it.

According to Meinig, this team of doctors showed “how the bacteria in teeth act much like cancer cells that metastasize to other parts of the body.”

Meinig continues, “These bacteria inside the structure of the teeth similarly metastasize, and as they migrate throughout one’s system, they infect the heart, kidneys, joints, nervous system, brain, eyes, endanger pregnant women, and in fact may infect any organ, gland, or body tissue. In other words, root-canaled teeth always remain infected. Even worse, these infections are responsible for a high percentage of the degenerative disease illnesses which are epidemic in our country today.”

The anatomy of a tooth is amazingly complex. Most of the tooth is comprised of dentin, which contains microscopic tubes. Dr. Price explained, “The dentinal tubuli of a single-rooted tooth comprise canals totaling approximately three miles in length.”

When the tooth is alive, the tubules contain fluid that carries nutrients to the teeth to keep them healthy. When a person eats sugar, the flow of the fluid is reversed, causing tooth decay.

Most people are aware that cavities are formed when sugar left on the teeth is consumed by bacteria in the mouth, producing a byproduct of acid, which eats away the teeth. But scientists have found that sugar doesn’t even have to touch the teeth to cause decay.

When sugar is introduced directly into the stomachs of rats via a tube, the flow of the dentin fluid is reversed. The same metabolic effects result from a high carbohydrate diet, which accords with Price’s conviction that refined flour and sugar were causing major medical problems in cultures transitioning from traditional diets to modern ones.

Here’s where the root canals come in. After a tooth decays to a certain extent, and fillings aren’t going to stop the decay, a root canal is performed. The tooth is cut off, the center pulp and nerves are removed, and a supposedly sterile filler is inserted. But Price and others contended that a root canal cannot prevent bacteria from inhabiting the tubules, which no longer have fluid in them.

Dr. Price and others were able to verify which types of bacteria are left in the teeth—the most common is strep—and that they quickly become anaerobic, meaning they don’t need oxygen to survive. Furthermore, Price’s experiments showed that almost nothing can kill the bacteria in the teeth, except for extremely harsh drugs that can’t be used in the mouth. Decades of research, starting with Price and continuing with other researchers who took up where he left off, indicate that there is no such thing as an uninfected root canal.

Meinig, who passed away in 2008, contended that the focal infection theory was never given a fair shake by the medical community, especially endodontists, whose practice is based on doing root canals. He takes 25 chapters in this book to present the evidence. There is much technical material for doctors and scientists, yet the book is accessible to the lay person, with concise summaries for the general reader at the end of each chapter. Below are some examples of the topics covered.

Learn what to do

What should you do if you suspect a root canal may have been the cause of other health problems? This book recommends you first seek out a “biological” dentist, who will take dental infections seriously.

Dr. Hal Huggins is the dentist who gave Dr. Meinig the copy of Dr. Price’s work, and he continued the research on dental infections and focal infection. Visit his website, hugginsappliedhealing.com, and click on “find a dentist.”

A biological dentist may be able to test for harmful bacteria in your mouth. Often it is recommended that an infected tooth be extracted, but not always. Dr. Price always made it clear that even though all root canals are infected, not all infections cause serious health problems.

A biological dentist will also be concerned about infection remaining in the socket or jawbone, and there are special procedures a surgeon can perform to attempt to minimize the risk of such remaining infection. The surgical extraction protocol is explained in the last chapter of the book.